The past two weeks I have been watching Ken Burns documentary "Vietnam" with my husband and my adult son.  Tonight is the last of 10 episodes for a total of 18 hours of superb historical storytelling.
I was a young girl when the war broke out and grew to a young adolescent at its end.  I don't recall knowing about the war during my childhood.  I don't think my parents were dialed in on the daily news.  My two older sisters were teenagers in high school and the war lasted into their young adult lives.  It didn't touch my life personally back then.
These past two weeks were difficult to absorb.  Difficult to watch so much destruction to life.  All kinds of life.... human life, plant life, animals...
War is hell.  There is no reason for it in my small opinion.  It is simply sad...dark, colorless, gray...
I came upon a reference photo from a website I use that allows artists to use copyright free photo references for artistic creation.  The website is called PaintMyPhoto pmp-art.com.  I appreciate the generosity of these photographers to allow artists to create from their composition and perspective.  The photo I used for this piece today is posted below.
I am reminded today to be grateful for life, for living in a peaceful community, for all the abundance around me.  I do not take these gifts for granted.  How 'bout you?  What are you grateful for?

A favorite subject for me!

I am a lover of felines. I have four cats of my own along with one lovebird! This wonderful feline is not my cat but one I see often.  When he can, he sneaks into the piano room of my teacher's house and promptly takes a seat at the bench ready for attention.  Cairo is such a character. An Abyssinian, he is vocal and quite affectionate.  His emerald green eyes and too large for his adorable face ears, enchant me each time I am graced with a visit.

My goal today was to capture his eyes and leave the rest loose and expressive.  I have included my reference photo below.  For the hour I painted this piece, I felt like I was having a conversation with this photogenic feline! 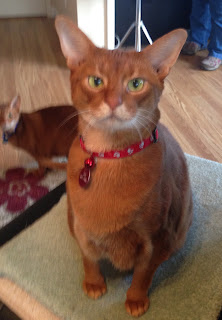 I remember this day driving north to San Francisco with my daughter to take in our last ballet of the season.  The hillsides of highway 280 were very green as we had just ended a very wonderfully wet winter season here on the central coast of California.
I drove and she took photos.  The clouds were plentiful and fluffy and the sky a deep cerulean blue.  We were in the midst of spring.
Clouds continue to fascinate me and challenge me at the easel.  Seems I've done hundreds of cloud studies.  I don't think I'll ever be done gazing  up at these mysterious figures in the sky.  Hopefully, I will keep my eye on the road as well....


Today I am visiting my daughter at her college campus.  She attends UC Berkeley, the seat of the free speech movement.  With the country's political climate in a series of constant storms, I thought it fitting to share this cloud study I did from a lesson I followed along with master pastelist Marla Bagetta  marlabaggetta.com   I have learned most of what I put into my art practice from generous artists like Marla Baggetta, Karen Margulis, Bethany Fields, Susan Jenkins, to name a few. They share their knowledge and techniques online via YouTube It is a time honored tradition to pass on what you know in the art world and for artists to practice what they see.

There is a planned march on campus tomorrow. These demonstrations lately bring to the news the widening rift between political ideologies. Sometimes rhetoric leads to violence...it has me worrying sometimes for my daughter's safety... whatever side of the coin one may land, it would sit better with us mothers if the kids could just get along on the playground and avoid a storm.....

Today was my "domestic chores" day.  A run to the pet store, the grocery store, the water store....My goal was to be finished by 12:30. Accomplished! After lunch it was time to give myself some studio time. While I was out doing my chores, I made a little detour to a local art store. I can't seem to get out of any art store with out a minimum of a $50 tab. Fifty four dollars was today's total which bought me four 18 x24 sheets of Mi Tientes Touch sanded pastel paper. They come in a variety of colors. I chose a light sky blue, a rich beige, warm brown, and black.  I didn't use any of those sheets of paper today. Instead I rummaged through some rejects and decided to try again with this autumn tree.
One of my goals as a pastel artist is to be loose with my marks. Try not to stay attached to the
reference image, and make decisions about use of color...move away from using local color.  Habits die hard. I don't feel I accomplished those goals today, but I did improve upon an old reject. For me, success means enjoying the process. After my "chores" today, I really enjoyed myself! 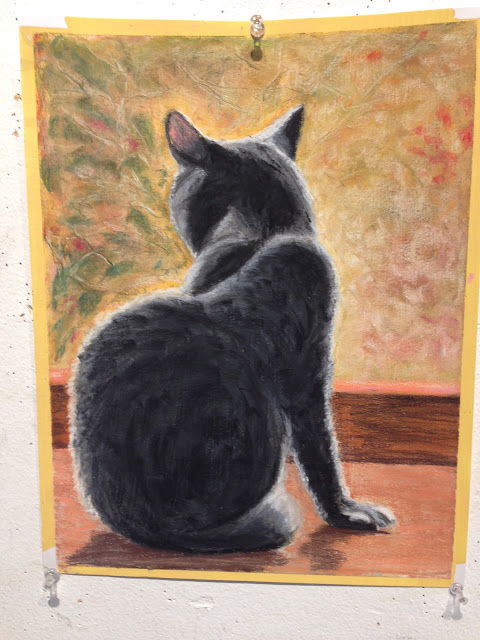 Our $4,000 cat, Moscow, put a price on his head the summer of 2014.  My family and I were vacationing in Australia in the North Territory where there is no cell phone coverage.  After traveling the Austrialian country from Sydney up the east coast to Queensland, we were finishing up our adventure with a road trip in a too small camper van into Kakadu and Litchfield National Parks.
A stop at a ranger station closer to civilization prompted me to check for email messages.  One from our trusted pet sitter alerted us to a veterinary emergency playing out back home.
Moscow had been missing in action for two days only to return bedraggled and quite ill.  Without the ability to contact us, our pet sitter made the difficult decision to take our sick kitty to the vet emergency unit.  Long story short, this little bugger had quite the lung infection and was teetering on losing his last life.  A week in intensive care and $4000 buckeroos later, we brought our little gray troublemaker home and broke it to him that he just bought himself a lifetime indoor ticket!
Now, Moscow begs every now and then to escape to the wilds of our very civilized neighborhood.  No Outback for this guy.  He is often gazing out our bedroom window which is where I captured one of those moments. 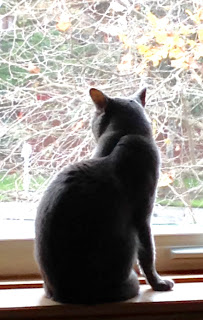 My reference photo of Moscow 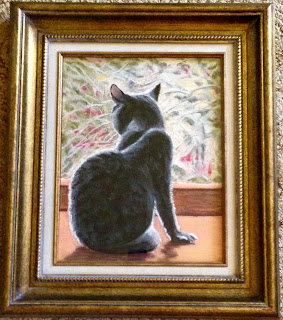 The framed piece which hangs near the window from where he gazes...

Where do artists get their inspiration?
For me, I pay attention to everything.  While I take a walk or drive in the car, I am looking at the light. How does it play on the trees, the buildings.  I take a lot of photos....lately I am noticing the sky and clouds.  I wish to paint the clouds as I see them....not from a photo...but perhaps how I remember them when I took the photo.  Was it chilly outside? What season? Looking for colors that we don't usually associate with clouds and sky, I see greens and lavenders and pinks and oranges....white is often not what I see.... and the sky? Well, what color do you see?
Today I painted a vista of the Santa Cruz Harbor from a distant view. I am so lucky to live in this beautiful place. Perhaps, you'll want to visit someday? 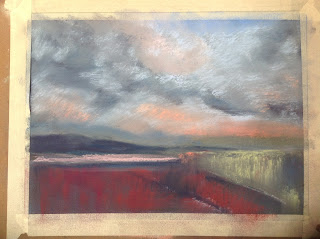 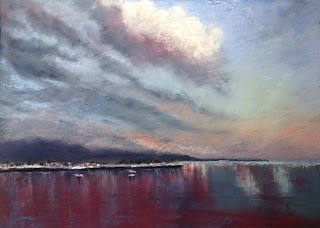 My artistic journey began about 5 years ago when I decided to take a drawing class at our community college here in Aptos, a neighboorhood of Santa Cruz, Ca.  Drawing 101.... had me at the starting gate.  I had to learn the "lingo" . Words like contour, value, tone, contrast, perspective, among other terms shaped my learning experience.  I was a beginner. I started with charcoal, graphite, and the occasional white chalk ( an unknowing precursor to my current obsession!).  I drew and still do paint from observation.  I admire artists that can create from imagination.  For me, I haven't crossed that path yet.  I just wouldn't know where to put things on the paper!  I kept sketch books...there are many now in my studio, that are full of early sketches..


Drawing 101 led to Drawing 102 which led to figure drawing from a live model.  I still practice drawing the live model from a very accomplished artist here in Santa Cruz , Susie Wilson.  She is extremely talented, classically trained, and a delight to learn from.


Below are some of my early charcoal and graphite works.  Enjoy! 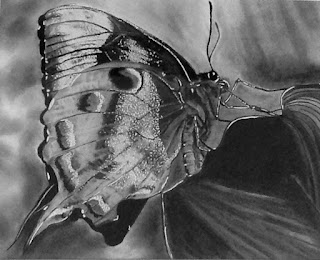 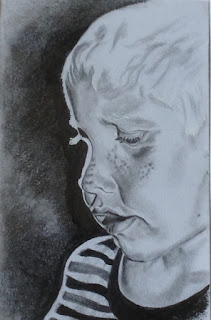 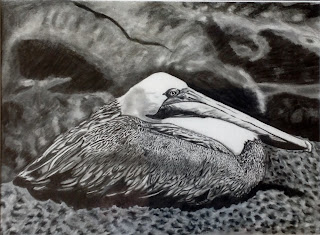 Pelican on the Bluff © Donna Gross 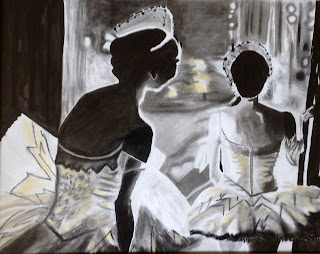 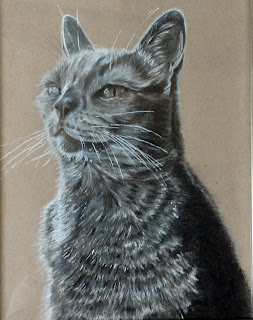 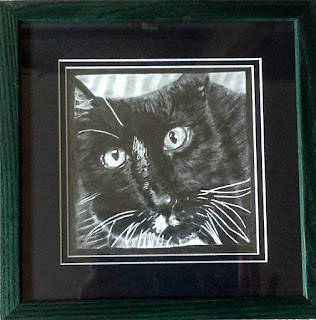 Email ThisBlogThis!Share to TwitterShare to FacebookShare to Pinterest
Labels: Black and White

And so it begins.... I have been following other artist blogs for some time now .  It is a daily delight to see what it posted and what new tidbit I can learn in my pursuits.  I have been told
that I should "show" my work...to get it out there.  Art is meant to be shared.
I am a pastel artist....I dabble...I am unsure about the business side of art and so for now I am painting everyday and sharing ..
Enjoy my journey along with me and please come visit again and leave a comment!
I look forward to hearing from you.

"James" "Partners For Life" A bird can't preen its own head with its bill, so they use their feet to clean head fe...

Donna Theresa Fine Art
Hello! Welcome to my world of creating beauty and joy with soft pastels! Follow me on my journey of artistic creation. You'll be glad you did!